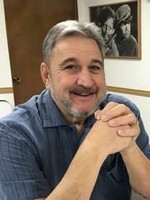 In Memory of Louis/Lou/Rusty Campana, Loving Husband, Father of two, Grandfather of two, Brother, and Uncle to many, died Tuesday morning surrounded by family after a long battle of heart failure.

Lou was born in Chicago IL in 1953, then grew up in Northridge CA from 1958 to 1978. He married his wife and soul mate Tampa in 1978 where they then moved to Simi Valley. Together they had their two children, Michael and Nicole, then moved to Palmdale in 1988.

Lou had a successful career for 16 years with Vons Grocery, then switched paths to Electronics where he retired as an Overseas Director of Manufacturing.

Lou retired in 2015 to Camarillo CA with his wife Tampa. While in his retirement and even prior, Lou enjoyed going to his vacation home in Palm Springs and challenging the casinos. He especially loved the game Pai Gow. Throughout his life he enjoyed traveling, family vacations, and all imaginable parties for family and friends. He had a “build it yourself” mentality and did much of the work on his home that he and Tampa finally settled in.

Lou was a giving person and his family and friends were everything to him - he poured his heart and love into everyone.

All rights reserved. This obituary is also archived at obittree.com