To share your memory on the wall of Louis Campana, sign in using one of the following options:

Provide comfort for the family by sending flowers or planting a tree in memory of Louis Campana.

Provide comfort for the family of Louis Campana with a meaningful gesture of sympathy.

In Memory of Louis/Lou/Rusty Campana, Loving Husband, Father of two, Grandfather of two, Brother, and Uncle to many, died Tuesday morning surrounded by family after a long battle of heart failure.

Lou is survived by his Wife Tampa Campa... Read More
In Memory of Louis/Lou/Rusty Campana, Loving Husband, Father of two, Grandfather of two, Brother, and Uncle to many, died Tuesday morning surrounded by family after a long battle of heart failure.

Lou was born in Chicago IL in 1953, then grew up in Northridge CA from 1958 to 1978. He married his wife and soul mate Tampa in 1978 where they then moved to Simi Valley. Together they had their two children, Michael and Nicole, then moved to Palmdale in 1988.

Lou had a successful career for 16 years with Vons Grocery, then switched paths to Electronics where he retired as an Overseas Director of Manufacturing.

Lou retired in 2015 to Camarillo CA with his wife Tampa. While in his retirement and even prior, Lou enjoyed going to his vacation home in Palm Springs and challenging the casinos. He especially loved the game Pai Gow. Throughout his life he enjoyed traveling, family vacations, and all imaginable parties for family and friends. He had a “build it yourself” mentality and did much of the work on his home that he and Tampa finally settled in.

Lou was a giving person and his family and friends were everything to him - he poured his heart and love into everyone.

To send flowers to the family or plant a tree in memory of Louis Michael Campana, please visit our Heartfelt Sympathies Store.
Read Less

Receive notifications about information and event scheduling for Louis 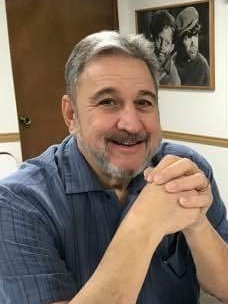 We encourage you to share any memorable photos or stories about Louis. All tributes placed on and purchased through this memorial website will remain on in perpetuity for generations.

Adam, Alana, Linda, Mary and the OCDETF Section sent flowers to the family of Louis Michael Campana.
Show you care by sending flowers
Hand delivered by a local florist

Adam, Alana, Linda, Mary and the OCDETF Section sent flowers to the family of Louis Michael Campana.
Show you care by sending flowers
Hand delivered by a local florist
JC

Lou, Rusty, brother-in-law, What a great man! You left us way to soon. You are so loved and missed by your brother and me. You were always there for us, and our girls. What a great family man and husband you were. You will always be in our hearts and thoughts. I will always remember Sunday’s! Love you, Janeen

We were very sorry to hear of Lou’s passing. Throughout the years when we would cross paths we got a kick out of his quick wit and sense of humor. He will truly be missed. He leaves a wonderful legacy.
Comment | Share Posted Jan 21, 2019 at 06:01pm via Condolence
AS

We are thinking of you during this difficult time.

Adam, Alana, Linda, Mary and the OCDETF Section purchased flowers for the family of Louis Campana.
Order Now | Show All
Comment | Share Posted Jan 20, 2019 at 11:14am via Floral Arrangements
RJ

Family and friends you have my deepest sympathy. This is a difficult time for most. There are basic things that can help anyone get through the pain no matter what age, gender or religious beliefs. Many have been helped with the twelve basics or just a few. You can go to jw.org and get the basics with no cost ever. See the article “Help for those who grieve “ in the magazine section. Anyone can get help and comfort.
Comment | Share Posted Jan 20, 2019 at 07:43am via Condolence
RC

Dearest Tampa, Michael and Nicole,
Our words can’t convey our true sorrow for the passing of Rusty., but we have the comfort of knowing that he rests in the arms our our loving Savior Jesus Christ. We pray you all peace in that knowledge. Rusty is once again big and whole and handsome and full of love and kindness and probably shuffling the cards for some poker with all his uncles in heaven.. There will never be another like him. He will be greatly missed. God be with you through this valley. We love you. Cousin Bobby and Janet.
Comment | Share Posted Jan 20, 2019 at 12:31am via Condolence